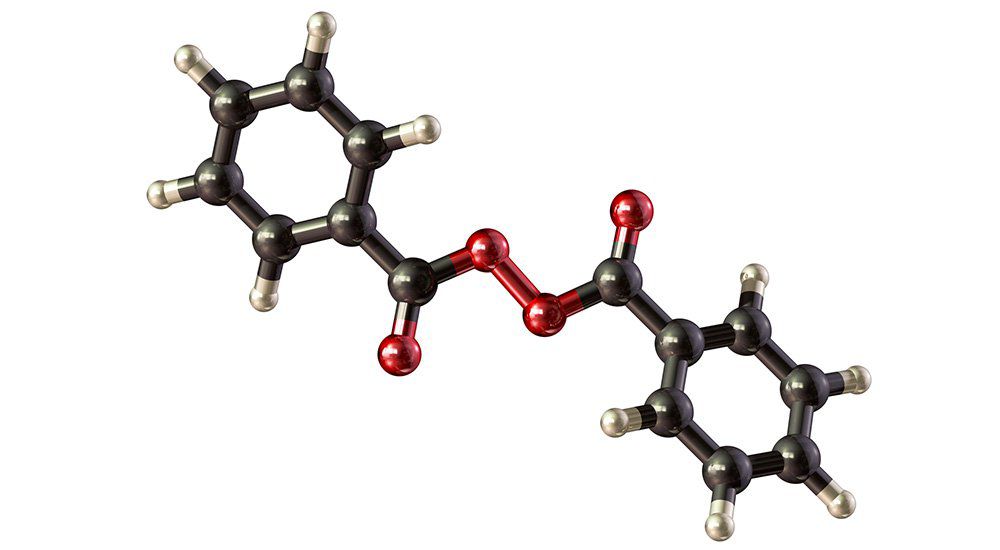 What is Benzoyl Peroxide?

Benzoyl peroxide (BPO) is a topical antibacterial treatment that is considered to be one of the most effective acne medications.

Did you know acne occurs when oil and dead skin cells plug hair follicles? One of benzoyl peroxide’s key attributes is its ability to penetrate the hair follicle to reach the bacteria that cause acne – the p. acnes bacteria – and then kill them. It’s the reason BPO was included in some of the world’s first acne treatments and has continued to be used as a gold standard to fight pimples for more than 50 years.

If you look at the many prescription and over-the-counter acne treatments that include benzoyl peroxide, you’ll see that concentrations vary widely. Some formulations include 10% BPO, while other acne products use less.

How does Benzoyl Peroxide Work?

In the Proactiv+® 3-Step System, the benzoyl peroxide is delivered using our exclusive Smart Target® Technology. The BPO is encapsulated so it doesn’t sit on the skin’s surface where it can cause irritation. Instead, it is pulled directly into the pores, where it can instead fight the bacteria, not the surrounding skin.

The Benefits of Using Benzoyl Peroxide

Benzoyl peroxide is a proven acne treatment that’s included in many prescription and over-the-counter products. It’s also widely recommended by dermatologists and skincare experts because of its effectiveness on a variety of skin types.

A primary benefit of benzoyl peroxide is the elimination of acne-causing bacteria. In addition, p. acnes bacteria do not build up a resistance to BPO in the same way they do with antibiotics. So benzoyl peroxide can remain effective as a treatment for acne over a long period of time.

The most common side effects of using benzoyl peroxide for acne are skin reactions:

These are especially common at the start of treatment and some people may misinterpret these reactions as an allergy to BPO. However, serious allergic reactions to benzoyl peroxide are rare.

While it’s not exactly a side effect, benzoyl peroxide can bleach towels and clothing, so it is important to be cautious during and after application of a BPO acne treatment.

A powerful acne treatment on its own, benzoyl peroxide can be even more effective when combined with additional ingredients, such as salicylic acid. Both the Proactiv+ 3-Step System and Proactiv® Solution 3-Step System include BPO as an active ingredient.

Below are the Proactiv products that feature benzoyl peroxide:

Over the years benzoyl peroxide has become a gold standard for treating acne: it kills the p. acnes bacteria, unclogs blocked pores and keeps them clear, and reduces inflammation. Very few other acne-fighting ingredients have so many benefits.

How to Treat Your Acne