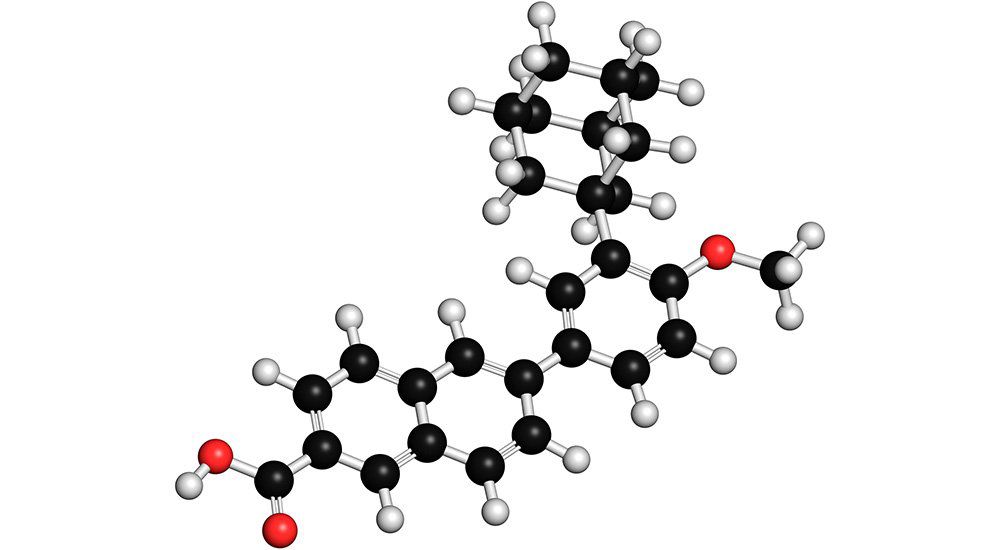 Adapalene is a topical retinoid medication prescribed by doctors and dermatologists for the treatment of acne. It has been around for over 20 years and over 40 million people around the world have used Adapalene.

The good news for people with acne-prone skin is that the United States Food and Drug Administration recently approved Adapalene Gel 0.1% for over-the-counter acne treatments. That means you no longer have to bear the expense of doctor visits to enjoy all the proven benefits of Adapalene.

When the announcement was made, the FDA stated, “Millions of consumers, from adolescents to adults, suffer from acne. Now consumers have access to a new, safe and effective over-the-counter option.”

How does a retinoid like Adapalene treat acne? Acne like pimples, blackheads and whiteheads start with a clogged pore. Your skin cells are constantly renewing themselves. As old cells die, they shed and reveal fresh skin. But if you have acne-prone skin, the dead cells mix with oil, become sticky and instead of shedding they clog your pores and trap p. acnes bacteria inside.

By unblocking these pores and promoting faster cell turnover, Adapalene targets acne at the source, before the blemishes have a chance to form on your skin. As dermatologist Ted Lain describes it, “the dead skin cells do not have the opportunity to collect in the pores which in turn prevents the formation of the earliest acne blemishes.” Austin-based Dr. Ted Lain is one of the nation’s most sought-after dermatologists and is a frequent contributor in print, television, and online discussions of skin health. He was also a paid consultant for The Proactiv Company when he authored this article. Adapalene is also anti-inflammatory so it helps with the redness and inflammation of papules and pustules that have already formed.

Even though Adapalene is new to acne sufferers who count on over-the-counter products to keep skin clear, it’s by no means a new acne treatment. It has been a celebrated acne-fighting ingredient for decades and has proven itself in clinical trials.

Adapalene can be used on the face and the first effects of Adapalene may be visible in just two weeks, but it may take up to 3 months of daily use for you to see consistent results.

When first used, Adapalene can cause dryness, redness and irritation for some individuals. This irritation usually lessens after the first 4 weeks of continued use, however. In some instances acne may appear worse for a short time. If this occurs, you can try a gentle, non-comedogenic moisturizer, preferably one with sunscreen protection, to counteract the dryness. If irritation becomes severe (overly bothersome), stop use and ask a doctor before using the product again.

Finally, women who are pregnant or breastfeeding should consult a doctor before using Adapalene as an acne treatment.

Adapalene belongs to a class of medication called retinoids. As an acne medication it has been favored by dermatologists for decades, but until recently was only available by prescription. It works on acne by clearing clogged pores and keeping them clear so p. acnes bacteria aren’t trapped inside and blemishes don’t have a chance to form. Adapalene also boasts powerful anti-inflammatory properties that can benefit existing pimples.